Major changes are occurring in the banking industry as traditional banks are feeling the pressure to ‘transform’ in an effort to keep up with the strategies of non-traditional banking start-ups.

Take fintech startup Revolut which offers an electronic wallet rather than a traditional bank account. The company recently applied for a European banking licence. If the company receives this licence, Revolut will be able to offer credit and deposit services across the European Union.

Adding new features on top of existing ones, the company is also building its own payment processor to reduce reliance on third-party companies.

However, Revolut is not the only mobile account on the market. ‘Challenger banks’ (small retail banks established with the intention of competing for business with large established national banks) are developing at a rapid pace, not just in the UK, but also globally.

UK startup Monzo labels itself as “the bank of the future.” The company received a full UK banking licence from the FCA and PRA in April 2017. Users receive balance updates immediately on the Monzo app as well as intelligent spending and budgeting notifications. 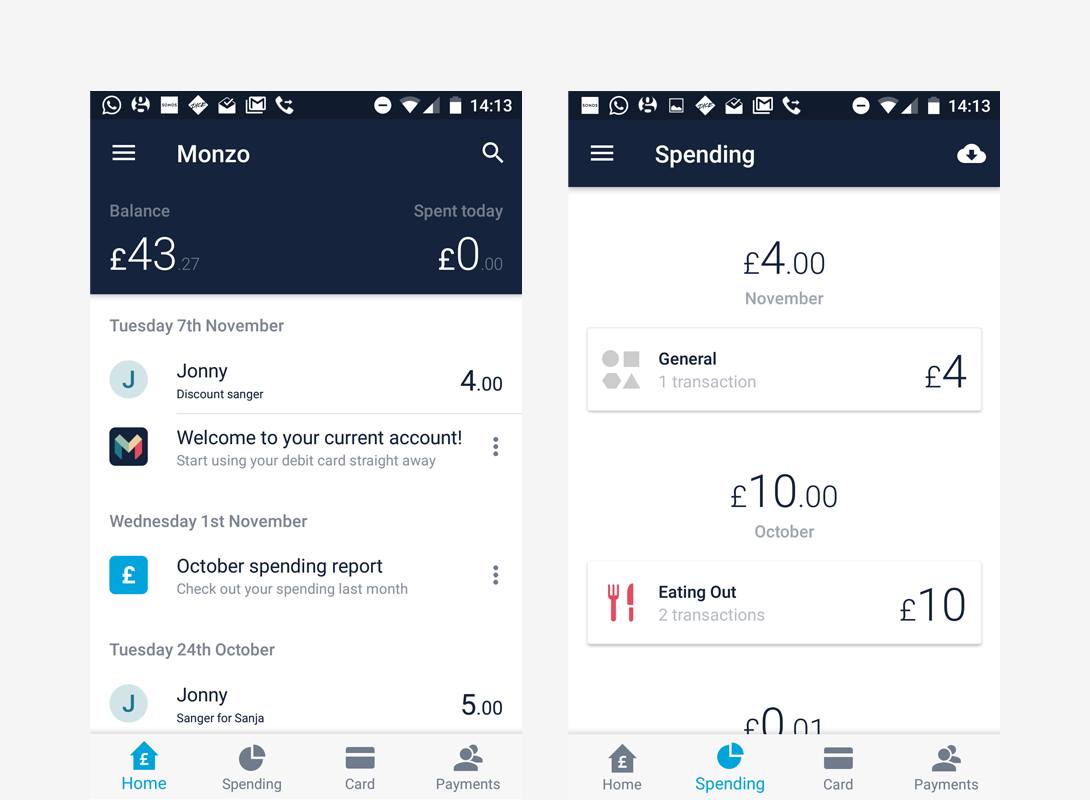 Starling Bank is another mobile-only bank account with similar spending notifications and instant payment information. In addition, Starling Bank offers a virtual card via Apple Pay. Similar to German mobile-only banking company, N26, Starling also partners with other banks and fintechs to offer additional services such as in-app access to cheap international money transfers. Starling Bank plans to stick to only offering a current account. What Monzo plans to do remains to be seen.

Rather than focusing on day-to-day payments like Starling, N26, and Monzo, UK mobile-first banking startup Atom Bank looks at savings and mortgages. The company uses biometric authentication (face and voice recognition) to quickly and instantly verify user identities in the bank app. The company has a focus on table-topping savings rates which will likely attract the older generation concerned with the security of app-only banking, although Atom’s current target audience is millennials.

U.S. based company BankMobile attracts a similar customer base. Offering a wide range of products and services such as personal lines of credit, loans, and personal bankers, the services are designed specifically for millennials with free ATM access, built-in rewards for good school and financial behaviour, and money management tools.

Tandem is another mobile-only targeting millennials. The UK challenger bank offers loans, credit cards, and savings accounts. Interestingly, the company is a champion for product comparisons and promises to help save customers up to £2,500 per year by alerting them to alternative deals.

But how many of these challenger banks are in it for the long-term?

Consider Aldermore – the UK app-only bank was recently bought by South African financial firm FirstRand. The company believes that the deal will provide scale and new digital capabilities. BankMobile is being acquired by Flagship Community Bank due to difficulties with regulations.

Other challenger banks are pressing forward despite financial difficulties. In July, Monzo turned down two acquisition offers. “We’re here because we believe we can build something that genuinely improves the lives of millions of people around the world, and ultimately a billion,” said CEO Tom Blomfield. “If we sell out to a big bank we will not achieve that goal.” During the same month, the company reported losses of nearly £7m. However, Monzo raised £71m this month in their latest funding round.

Although Tandem Bank lost its licence earlier this year after failing to secure funding, the company has agreed a deal to acquire 100% of Harrods Bank which Tandem says will bring around £80m of capital into the business. Atom Bank also shows no signs of slowing down. The company was recently named by Linkedin as one of the UK’s top 25 startups.

Other challenger companies are using collaboration as a means to be even more competitive and meet targets. For example, Starling Bank and N26 have teamed up with TransferWise to offer cheaper international transfers.

Despite the challenges for ‘challenger banks,’ mobile-only banking is growing and main high street banks need to get on board with the driving innovations and shifting industry before it’s too late to catch up.