In these unprecedented times… How many emails, posts, letters from companies have begun with those words over the last few months. It’s become the etiquette to preface any kind of communication with this opening, the nature and severity of Coronavirus made it unavoidable.

Unique in our lifetimes, devastating both in terms of lost lives and livelihoods – with the economic disaster that will surely ensue set to cripple us beyond anything we’ve experienced in the 21st century – unprecedented really is the word.

As if that wasn’t enough, another crisis hit and stirred a wealth of emotion after the horrific killing of George Floyd whilst in police custody on the streets of Minneapolis. A truly awful act, caught on camera, sparking protests and riots in the US and global condemnation.

In good times, major world events can often present opportunities for marketing and promotions that as a brand can be used to your advantage. A royal wedding, the olympics, a (popular) new president – piggybacking on the feelgood factor of a positive occasion can help a brand share in the glow.

These latest events are anything but ‘feelgood’ though and companies and brands have been tested to the limit with how they communicate with their customers – how do you market yourself when the world is seemingly imploding?

Finding that right balance between sensitivity and the need to communicate and promote themselves has been a tremendous challenge for many companies. Research by Lumen, an eye tracking user research company, concluded that ads that reference Coronavirus were getting 9% more attention than those that didn’t and this presents a moral dilemma for brands – should they say something about Coronavirus because it makes good business sense to do so?

It’s not just what you say though, it’s how you say it and a good example of this was restaurant chain Leon who led the way with a message that stayed true to their ethos of being kind to the planet as well being an incredibly useful way of helping the NHS. Their #feedNHS campaign brought together multiple restaurant chains and many independents to provide hot meals for frontline workers. 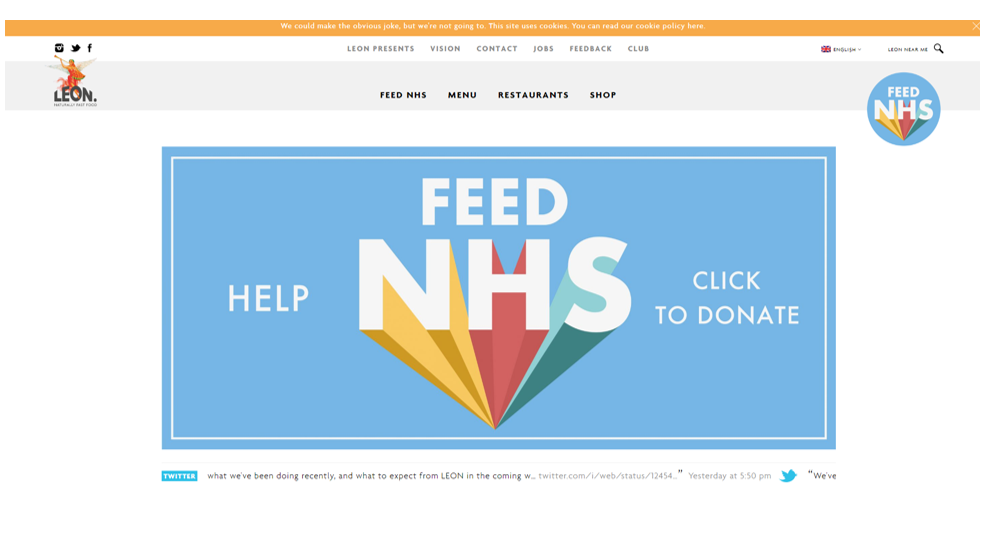 It was a simple message which was easy to get behind so much so that Matt Lucas even recorded a version of his ‘Thank you baked potato‘ song with proceeds going to the campaign. With restaurants being a major casualty of the pandemic this felt like a genuine and selfless cause which was universally well received.

Social distancing has brought several sectors to their knees but remains a very effective way of stopping the spread of the virus. One creative way of supporting the social distancing message saw brands such as Audi, Volkswagen and Mcdonalds manipulate their logos – all separating the interlocking parts to convey the concept of distancing.

Both the automotive and fast food industries have been badly hit by Coronavirus but this clever and creative response draws attention in a good way to the key health message and their brand.

A pandemic can affect all of us and bring people together but an incident such as the one that took place on the streets of Minneapolis with the killing of an unarmed black man at the hands of the police has the power to unleash a destructive force that can divide people as much as unite them.

As a brand it’s hard to know quite what to do. Racism is so ugly that no company wants to be associated with it and is a minefield when it comes to communicating about the topic. Generally it’s no go especially when it comes to marketing and advertising. 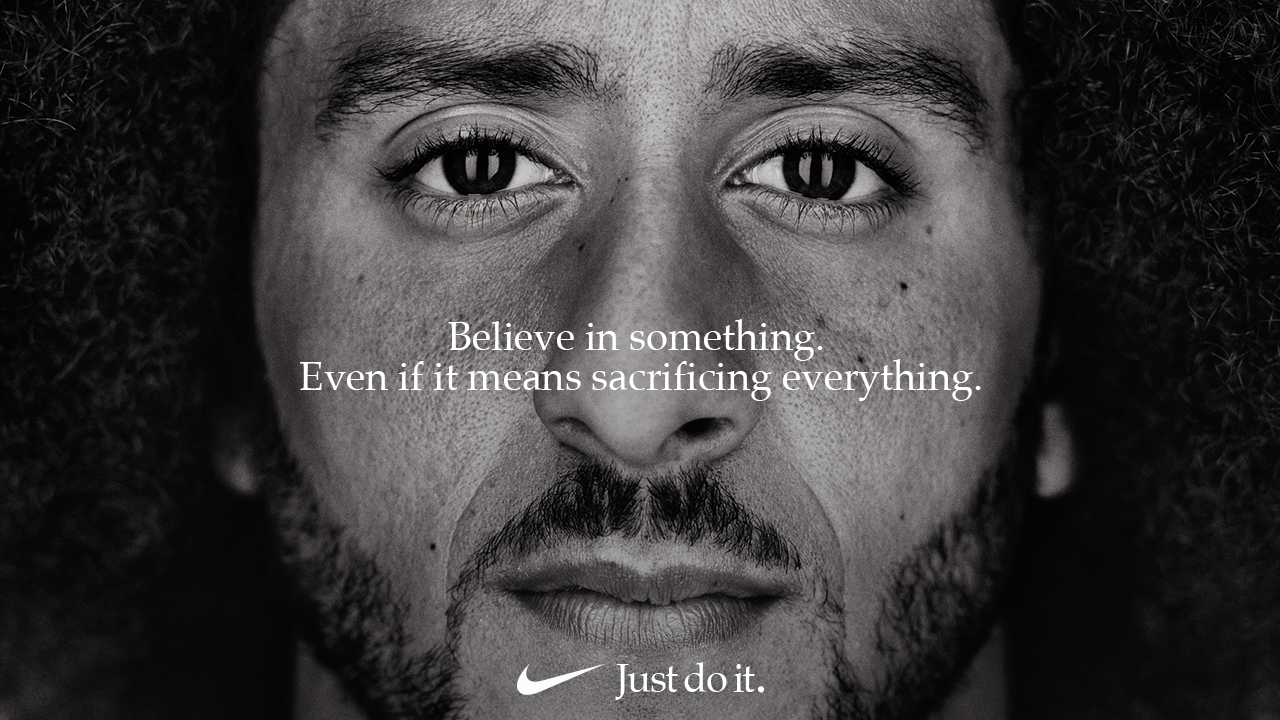 Unless you’re Nike of course. In 2018 the sportswear brand asked Colin Kapernick to become part of their ‘Believe in something’ campaign. The NFL player caught public attention with his kneeling protests during the national anthem prior to NFL matches, highlighting deaths in police custody. When he became part of Nike’s campaign it sparked boycotts of the brand, trainer burning and even criticism from the president but proved to be a winning move for the sportswear brand with sales and stock valuation soaring.

The murder of George Floyd and ensuing global reaction has put companies in an awkward position. A previously taboo subject is now a major talking point and brands have become conspicuous by not making a statement in some form as the current share everything culture we live in demands a response.

#BlackoutTuesday, the posting of black squares on social media whilst ‘tuning out’ for a day, became a worldwide phenomena and also led to swathes of companies expressing their solidarity with the movement.

My instagram on #BlackoutTuesday was a sea of black squares and I joined in as it gave me a way of expressing my utter disgust at events in the US. It was the most striking response I’ve seen since #metoo and a powerful display of solidarity. There were problems though with this response as many highlighted, this is a massive issue that actually needs oxygen and publicity – black squares and tuning out for a day did neither in many people’s eyes.

I can see their point but it’s what happens from now on that really matters. One day of expressions of support won’t change much, the debate and issues need to continue until real material change takes place.

For individuals to express an opinion is one thing but as a company of 10s, 100s or even 1000s it can be a huge challenge to get right. Like the challenges presented by Covid-19, the communication must be supportive and not detract from the overall message

This is a double edged sword though as by committing themselves to greater equity for example, those company’s have drawn attention to themselves and then been analysed and tested against their stated goals of greater diversity – if you talk to the talk then you need to have black members on your board in order to walk the walk. 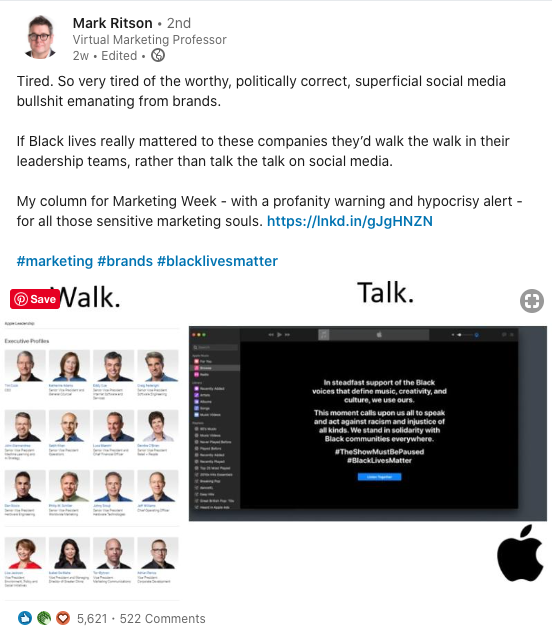 You’ll see from the number of comments on this post from Mark Ritson that it is an issue that incites a lot of strong opinions and possibly the most important lesson to be learned is whatever statement you put out, make it sincere and be prepared to back it up with action. In today’s bare all world, words are hollow unless there is real substance to them.

Visually this from Google wasn’t quite right for me: 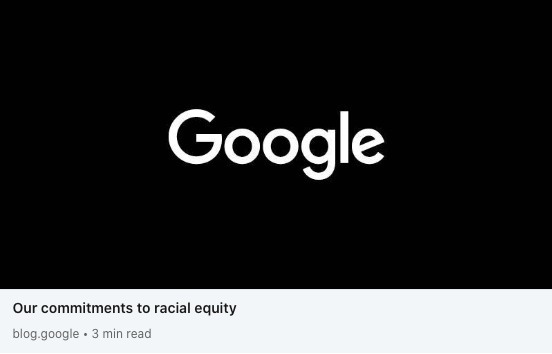 It wasn’t the content of the article but the branding of the black square that didn’t sit well. They probably weren’t the only brand to do this but actually the intention wasn’t for this symbol of #BlackoutTuesday to become branded even if it was to highlight their racial equality credentials. A more powerful visual statement in my view would’ve been a black square with no logo on it – recognising what it stood for and raising it above the brand.

Channel4 stood out in my LinkedIn feed during the maelstrom of communications that were being pushed out as brands raced to clarify their position on this thorniest of issues. 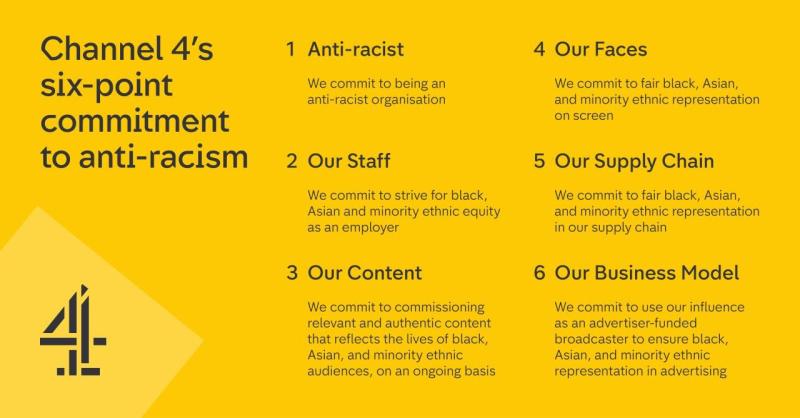 Visually it was Channel4 branded and steered clear of the black square and the message was also clear – we need to do better and here’s how we’re going to do it from staff, to on screen to the supply chain. The proof is in the pudding of course and only time will tell whether they make good on this commitment but in terms of the communication I think they got it right.

How to avoid pitfalls

So what can we learn about communicating in a crisis from these latest events? Our top take aways:

Sadly there will be more crises in the future and as businesses we are no longer able to live in a fluffy world removed from reality – how we act can really make a difference to all our lives.